I was born and raised on a farm in southern Alabama. I graduated from the University of North Alabama with a degree in business and economics. After working in the business world for several years, I knew something was missing even though I had accomplished much and was successful in man’s eyes. I realized that the void in my life was not knowing Jesus Christ as my Lord and Savior. I gave my heart to Him in 1978 and have been faithfully following Him ever since. I was ordained as a pastor in an Orlando church where I had served for several years. 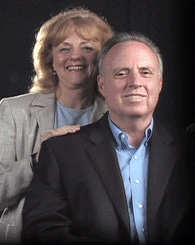 In late 2000, I began seeking the heart of God as to why more people were not being healed or keeping their healing. While I had been somewhat successful in ministering to the physically ill, I knew God promised more. Psalm 103:3 tells us that He is the God that heals all our diseases, yet only a small percentage of the people I ministered to received permanent healing.

God quickly answered my prayers. Shortly after I began praying about this issue, I received a copy of the book A More Excellent Way–Spiritual Roots of Disease–Pathways to Wholeness. One Christmas night in 2001, I picked the book up to read. As I read through the book, I began to see truth. The Spirit of God was speaking to me, bringing the revelation I had so desperately sought.

In the summer of 2001, I helped establish a food bank in Central Florida. Along with serving as Director of the food bank, my wife Linda and I founded and pastored a church (Destiny Community Church) in the same downtown Orlando area for five years. It was during this time that I began to reach out to those who were spiritually, emotionally and physically sick.

God is still the one who heals all our diseases.

The people I was praying for weren’t being healed for one simple reason. They had areas of their lives that lacked sanctification. Why didn’t I see it before? I had always been a student of the Word, and I knew the origin of disease. Disease usually begins as a result of separation between us and God. It involves an area of our life in which we need healing; spiritual healing. Physical healing comes as a result.

Doctors and psychologists have long known this information. There is a significant connection between our mind and our body. Having been immersed in different forms of alternative health myself, I knew this to be true and I had sought the opinion of one expert after another for my own physical ailments. I knew there was a huge connection between our thought life and our physical body.

In the past ten years, I have ministered to all kinds of spiritually-rooted conditions, ranging from arthritis to terminal cancer. Each has its own root. For some, it’s unforgiveness. For others, it’s fear and anxiety. I have seen countless miraculous healings, and one truth has become evident to me. God is still the one who heals all our diseases. I encourage you to take part in our teachings. Let the Holy Spirit speak to you about areas of your life in which you may need healing. God wants you to walk in freedom and divine health.

I was born and raised in Columbus, Ohio and moved to sunny Florida in the late “70’s. Through the persuasive efforts of one of my family members, I attended Calvary Assembly of God church in Winter Park, where I gave my heart and life to the Lord. I have been loving and serving Him ever since!

After being a single mom of two boys for about five years, I met and married Wendell in August of 1982. We both had been divorced and were involved in the singles ministry at Calvary. We remained friends for two years as we attended all of the functions that single people go to and both of us were involved in other relationships. When Wendell needed an assistant for his business, I was hired for the job.

The greatest joy is to see people become free from the burdens that they are carrying on their shoulders.

As time went on, we discovered that God was leading us into a different kind of relationship. Our friendship had turned into a romantic relationship and we both knew that it was God. After three months of knowing this, we committed our lives to each other and to God and were married at Calvary Assembly. We have 4 grown children, 12 grandchildren and two great grandchildren! (I have pictures!)

Wendell and I have served the Lord together in many different areas of ministry. My role has always been to be a helpmeet to Wendell. As we matured in the Lord and were faithful to do what He called us to do, we have been blessed tremendously. It is such a joy to work for the Lord!

Our present calling, Pathway to Health, enables us to minister to the total person, body, soul and spirit. The greatest joy is to see people become free from the burdens that they are carrying on their shoulders. God has provided us with knowledge to pass onto those that are weighted down, discouraged and without hope.

We know that the joy of the Lord is our strength and we want His joy to be passed onto others.

In His Love,
Linda Knight